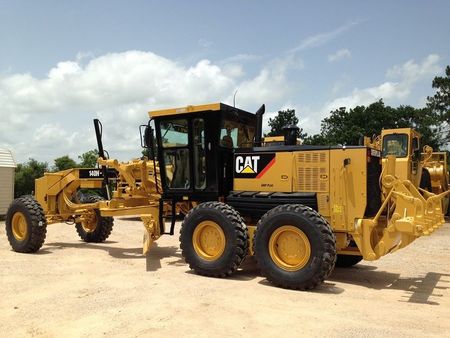 Armadillo Tractor is your number one Grader service provider.

In addition to its use in the road construction industry, internationally did you know it is also used in removal of snow, debris and earthmoving based on the location and requirement?

Motor graders come in after the heavy machines like the bulldozers are done with their job to give a finer finishing to the job.

Armadillo Tractor can help you with their knowledge and experice to give you the peace and mind you need for your grader needs.

What is a Grader?

A grader, also commonly referred to as a road grader or a motor grader, is a construction machine with a long blade used to create a flat surface during the grading process. Although the earliest models were towed behind horses or other powered equipment, most modern graders contain an engine so are known as "motor graders". Typical models have three axles, with the engine and cab situated above the rear axles at one end of the vehicle and a third axle at the front end of the vehicle, with the blade in between. Most motor graders drive the rear axles in tandem, but some also add front wheel drive to improve grading capability. Many graders also have optional attachments for the rear of the machine which can be ripper, scarifier, blade, or compactor. In certain countries, for example in Finland, almost every grader is equipped with a second blade that is placed in front of the front axle. For snowplowing and some dirt grading operations, a side blade can also be mounted. Some construction personnel refer to the entire machine as "the blade". Capacities range from a blade width of 2.50 to 7.30 m (8 to 24 ft) and engines from 93–373 kW (125–500 hp). Certain graders can operate multiple attachments, or be designed for specialized tasks like underground mining.

In civil engineering, the grader's purpose is to "finish grade" (to refine or set precisely). The angle, tilt (or pitch) and height of the grader's blade can be adjusted to achieve precision grading of a surface. The "rough grading" is performed by heavy equipment or engineering vehicles such as scrapers and bulldozers.

Graders are commonly used in the construction and maintenance of dirt roads and gravel roads. In the construction of paved roads they are used to prepare the base course to create a wide flat surface upon which to place the road surface. Graders are also used to set native soil or gravel foundation pads to finish grade prior to the construction of large buildings. Graders can produce inclined surfaces, to give cant (camber or sideslope) to roads. In some countries they are used to produce drainage ditches with shallow V-shaped cross-sections on either side of highways.

Steering for a motor grader is typically accomplished via a steering wheel or joystick controlling the angle of the front wheels, but many models also allow frame articulation between the front and rear axles, which allows a smaller turning radius in addition to allowing the operator to adjust articulation angle to aid in the efficiency of moving material. Other implement functions are typically hydraulically powered, and can be directly controlled by levers, or by joystick inputs or electronic switches controlling Electrohydraulic servo valves.

A more recent innovation is the outfitting of graders with grade control technologies, such as those manufactured by Topcon Positioning Systems, Inc., Trimble Navigation, Leica Geosystems or Mikrofyn for precise grade control and (potentially) "stakeless" construction. Manufacturers such as Caterpillar have also began to integrate these technologies into their machines out of the factory.